The Getty Trust possesses a large collection of medieval illuminated manuscripts. Some manuscripts have been placed in time/place and are on exhibit only after a certain vetting process that leveraged data from disparate databases and actual physical comparisons. A new process was considered with a new database for historical documents that features a new form of search that involves semantic triples to make powerful inferences given overlapping of data. This inferential search, in theory, could quickly place manuscripts in time and add historical context and origin data.  Once complete, the manuscript can be folded into the overall taxonomy, which would then clear it to be added to the exhibit with accurate information.
The design challenge was to compose an appropriate user experience for the Getty's resident art historians featuring the inference-based search engine. The goal of the experience was to help art historians easily add any known inputs about a manuscript in question, let the system make inferences, and offer additional contextual data. I chose the iPad as the ideal platform, versatile for such a project given its touch/swipe functionality for an interactive timeline I designed, its ability to take photographs, the use of one's finger (or a stylus) directly onto the screen to mark up images, and of course a touch keypad to enter text for manuscript pages. I named my proposed app "Dimension."
I suggested more of a visual approach given that the users were art historians and art scholars and added in a social/sharing component to allow users to communicate, collaborate and augment existing data. I introduced the idea of "milestones" (tap into actual historical events) to leverage the inference-based search by reaching out for more context (historical timeframe) around a manuscript.
Study, learn about users (roles, key workflows, context)
Art historians (from around the world)
Different languages (though all speak/read/write in English)
Work in lab (essentially

My high level ideas to consider for design:
• Animated map through time with nodes/objects with relationships
• Milestones -known (by the user) markers or entities to help find their way
• Recommendation engine given what others have searched/recommend
• Social/crowd source/Wiki aspect - comments/ability to add or hone information 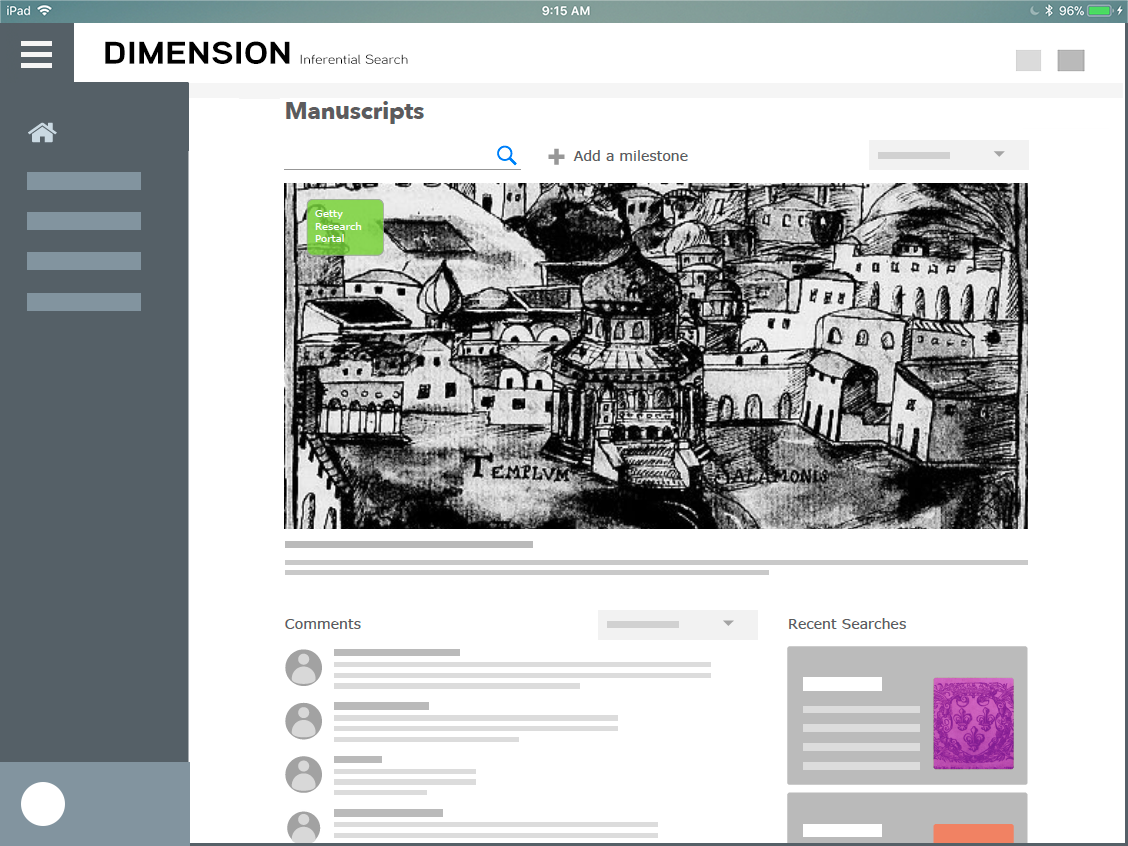 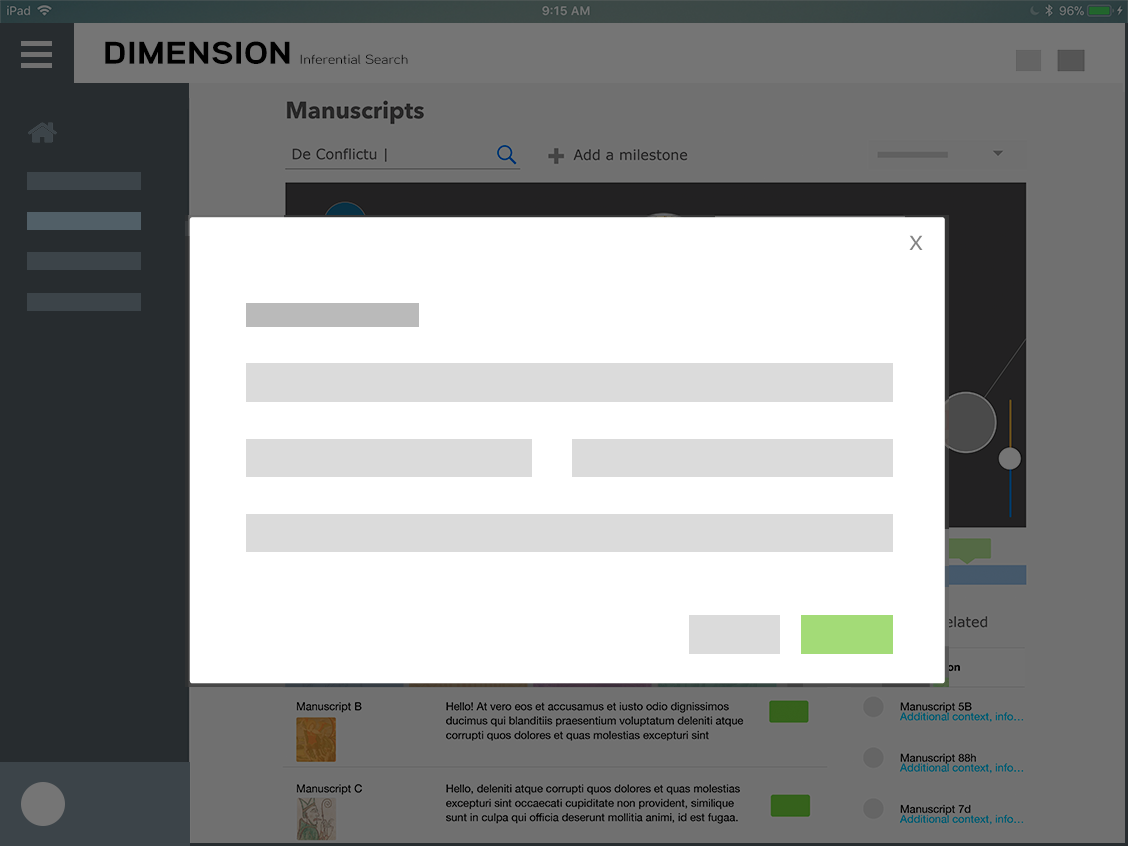 Users would have some contextual data around a collection of manuscripts or a particular manuscript so they may search with related manuscript names, monasteries, cities, cathedrals and add a timeframe "milestone" (ex. 1492 or discovery of America). The semantic triplet search engine would then generate associations.

Nav open as default: Icons and labels. Users may change default in preferences.

Users would experience an interactive viewport and timeline (interaction example) that may be swiped to move through contextual associations made by the semantic triplet search engine. Tapping a "dimension window" (the round images) will offer a pop-over summary of the contextual reference. Tapping the pop-overs call-to-action button offers a table of data (below the animated view/timeline) about that contextual reference for the user to continue exploration. 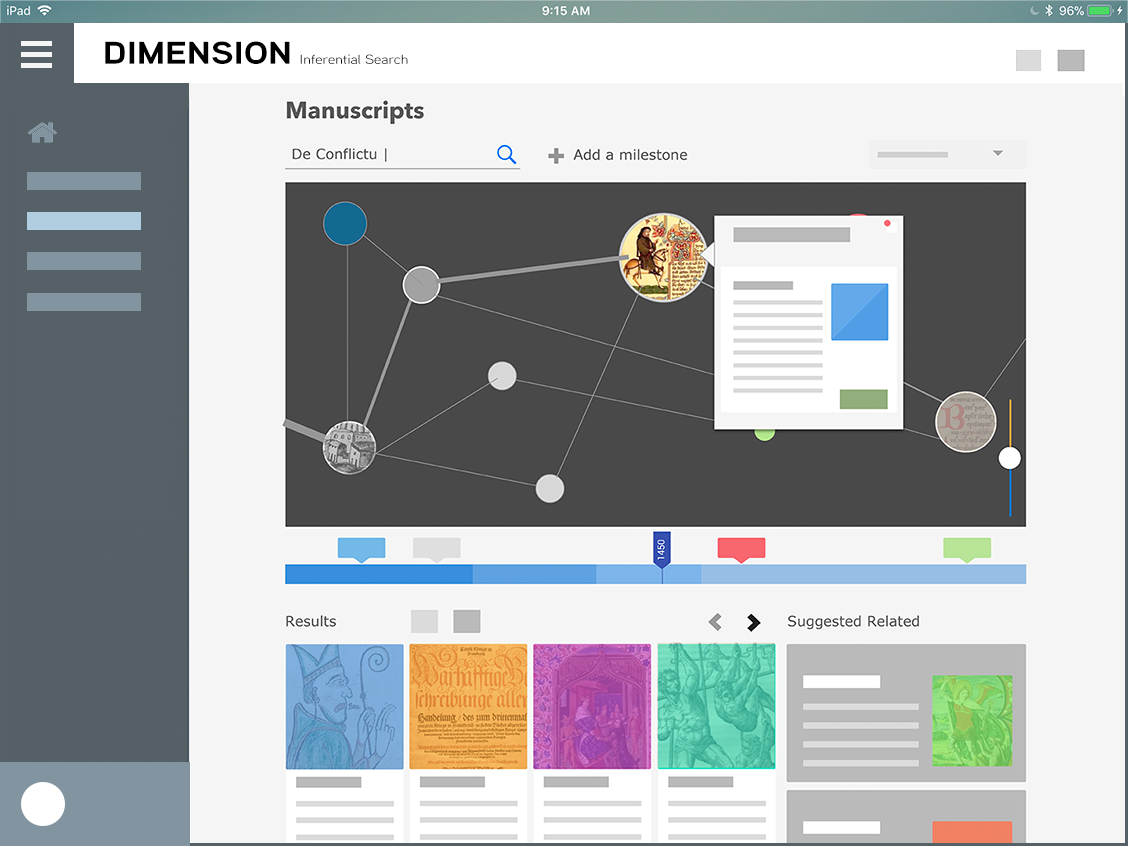 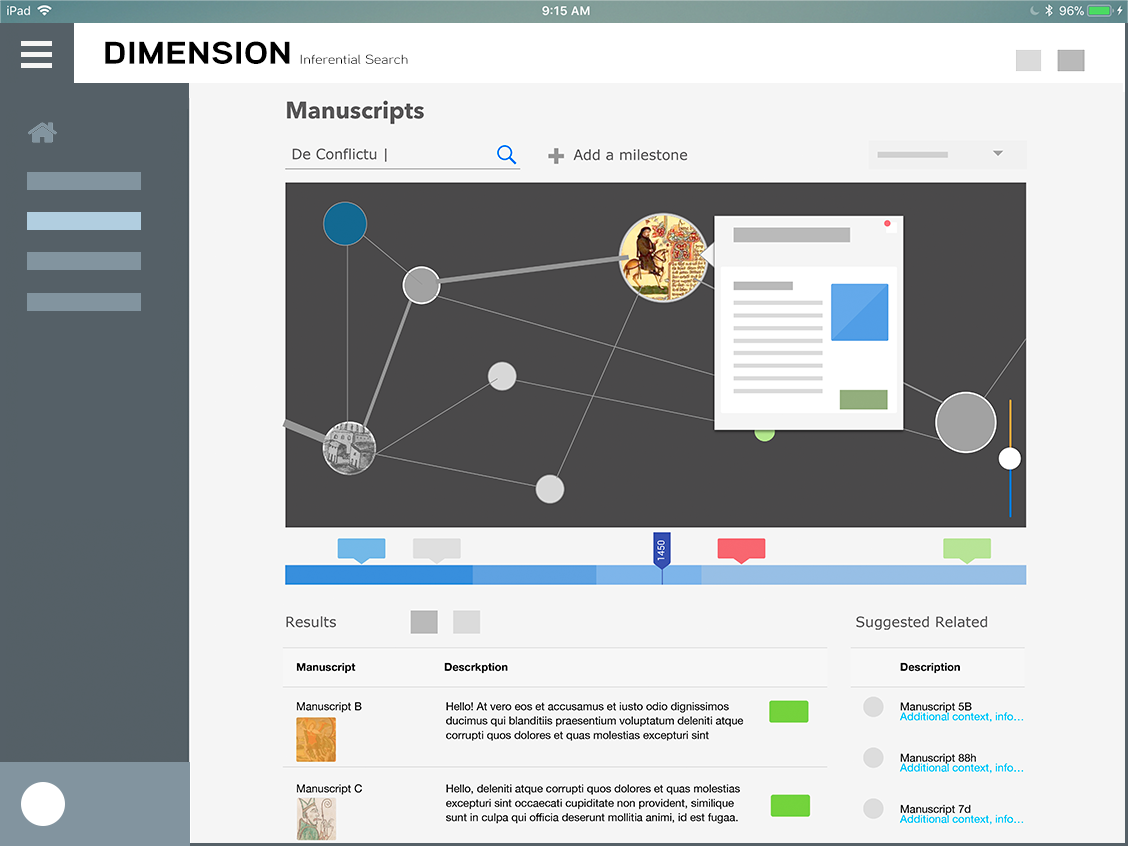 The search results ideally would offer a few closely related manuscripts, more inferences for the user to then attempt to either associate (or not) and identify so they may then tag and catalog the manuscript in question. If enough associations (meets a certain criteria) then the user could begin to enter the manuscript into the system as another digital object, which would not only make it an identified part of the collection, but also fortify the semantic triplet search engine with more data points.